“You can have all the knowledge and skills in the world, but if your “blueprint” isn’t set for success, you’re financially doomed.”
–T. Harv Eker 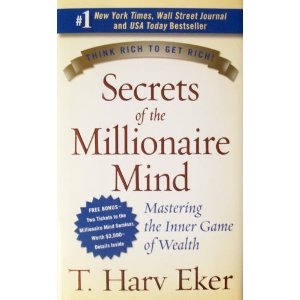 I want to take this opportunity to introduce you to T. Harv Eker. He is a bestselling author and one of the world’s top trainers. His newest book, Secrets of the Millionaire Mind™, is a publishing phenomenon, reaching #1 on the NY Times, Wall Street Journal and USA Today bestseller lists in its first week out!

In the book, Harv reveals 17 specific ways that RICH people think and act differently from POOR and MIDDLE-CLASS people.

The book is a brilliant yet quick read. I have been given access to a recording of a Teleseminar he hosted where he describes his foolproof methods for financial success. I’m sending you the link because the seminar really worked for me and I’d like to see you benefit too…

Simply put, Harv teaches people how to master the “inner game” of wealth in order to create outward success.

Harv seems to have a personal mission to help people realize their full potential by applying the principles he struggled to learn the hard way. These principles got him from debt to millionaire in only two and-a-half years, so I figure if he can do it, so can I. If you can grasp even a few of the principles of success he outlines, you, too, can achieve financial freedom.

One of the things I learned  was that the most powerful truths are simple and indestructible; you can use them to create a foundation upon which to build your own “rich life,” no matter how much or how little success you have experienced up until now. And a “rich life” is about more than just money…

You can transform your life from the inside out… 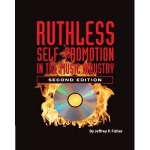 Product Description from Amazon.com
Despite the ever-changing nature of the music industry, one constant remains: you must become a ruthless promotion fanatic to achieve success. There are no quick fixes or shortcuts to fame and fortune in the music business. But if you truly desire success and are dedicated to putting your time, energy, money, patience, and talent to the task, you can achieve the notoriety you desire…if you learn the art of ruthless self-promotion.

“Ruthless Self-Promotion in the Music Industry, Second Edition” is not a book about how to compose, play, or produce music; it’s the key to the magic forumula for building your music career, reaching your goals, and achieving what you want, need, and feel you deserve. Effective promotion is a journey that never ends, and you will find yourself returning to this comprehensive, up-to-date reference again and again as you pursue your musical goals. 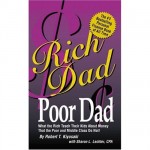 What the Rich Teach Their Kids About Money–That the Poor and Middle Class Do Not!

I loved this book. It made me take a good hard look at my relationship with money, but even more so, how I thought about my business.

Rich Dad, Poor Dad chronicles the story of the authors two dads, his own father, who was the superintendent of education in Hawaii and who ended up dying penniless and his best friends father who dropped out of school at age 13 and went on to become one of the wealthiest men in Hawaii. Kiyosaki uses the story of these two men and their varying financial strategies to illustrate the need for a new financial paradigm in order to achieve financial success in the new millennium. 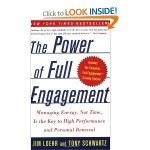 Managing Energy, Not Time, Is the Key to High Performance and Personal Renewal

by Jim Loehr and Tony Schwartz

These concepts have helped me tremendously in building a real balance between achievement and nourishing myself into my time management structures. With the understanding that nourishing myself is what enables me to reach peak performance – many of the “should” voices are silenced.

From Publishers Weekly via Amazon.com
The authors, founders of and executives at LGE Performance Systems, an executive training program based on athletic coaching programs, offer a program aimed at stressed individuals who want to find more purpose in their work and ways to better handle their overburdened relationships. Just as athletes train, play and then recover, people need to recognize their own energy levels. “Balancing stress and recovery is critical not just in competitive sports, but also in managing energy in all facets of our lives. Emotional depth and resilience depend on active engagement with others and with our own feelings.”

Case studies demonstrate how some modest changes can have an immediate impact. Loehr (Mental Toughness Training for Sports) and Schwartz (Art of the Deal, writing with Donald Trump) also include a chart highlighting Action Steps, Targeted Muscle, Desired Outcome and Performance Barrier and apply these tenets to individual cases. A chart analyzing the benefits and costs to taking certain action shows the impact negative behavior can have on both physical and mental well-being.

However, the actual “training program” whereby readers can learn how to institute certain rituals to change their behavior is less well-defined. Managers and other employees who have attended HR seminars may find this plan easy to use, but self-employed people and others less familiar with “training” may be unable to recognize their behavior patterns and change them.
Copyright 2002 Reed Business Information, Inc. 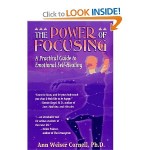 A Practical Guide to Emotional Self-Healing

I’ve been personally using these techniques for my own inner work for about 8 years.  And I use these techniques on a regular basis with my private coaching clients.  I find that “focusing” increases emotional intelligence, access to your intuition and a deeper understanding of what you’re really trying to tell yourself when you’re feeling tense or uneasy.

“Focusing”–defined as a body-oriented process of self-awareness and emotional healing–is employed today by thousands of psychotherapists with their patients. This book, the first to make the methods of this treatment accessible to laypersons, outlines in friendly, nontechnical language how to effectively use focusing to address a variety of issues.

Buy The Power of Focusing now 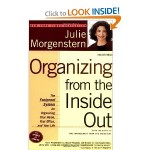 The Foolproof System For Organizing Your Home, Your Office and Your Life

I loved this book! I became so much better at managing my space which has freed up time and energy for other things.

It’s about time! Julie Morgenstern has written an organizing book that covers a new way of looking at the task of organizing effectively without labeling or blaming the person behind the lack of organization.  Rather, she says, people who don’t organize just never learned how to organize, through no fault of their own–after all, it’s not a skill that’s taught in school.

That said, she gets down to work helping you figure out an organizing system that will really work for you, not a system based on cookie-cutter filing concepts or special storage units. Morgenstern’s “from the inside out” system begins by laying out the possible reasons for a failure of organization: technical errors (like having a complex organizing system that breaks down), external realities (like not enough space for your belongings), and psychological obstacles (like fear of failure–or success).

Then, her Analyze and Strategize steps help create a plan of action based on your needs and goals, and the brief chapter called “Attack: Getting the Job Done” offers basic ideas for making space. The largest section of the book, “Applying What You’ve Learned,” addresses the specifics of organizing workspaces, home offices, living spaces, and storage areas. Each section has a “How Long Will It Take?” box that gives a realistic time estimate, and Morgenstern’s “Julie’s No-Brainer Toss List” for each area gives the permission and encouragement that most of us have been waiting for to get rid of things we’ll never use again.

The section at the end, “Tackling Time and Technology,” is worth its weight in DayTimers and PalmPilots. Whatever your organizing issues are, you’re not a hopeless case, and you don’t need special equipment–just a little understanding of the problem and a willingness to plan before diving in.

Buy Organizing from the Inside Out now 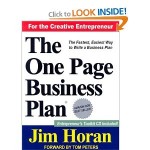 for the Creative Entrepreneur

I met Jim Horan when he came to speak to the Entrepreneur and Small Business Academy Meetup.  I very much enjoyed his whole approach to this most daunting of subjects. I often recommend this book to my clients.

The product description on Amazon.com was perfect for this book – where brevity is key:

“The Fastest, Easiest Way to Write a Business Plan” 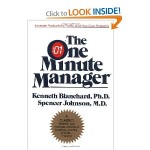 For more than twenty years, millions of managers in Fortune 500 companies and small businesses nationwide have followed The One Minute Manager’s techniques, thus increasing their productivity, job satisfaction, and personal prosperity. These very real results were achieved through learning the management techniques that spell profitability for the organization and its employees.

The One Minute Manager is a concise, easily read story that reveals three very practical secrets: One Minute Goals, One Minute Praisings, and One Minute Reprimands.

The book also presents several studies in medicine and the behavioral sciences that clearly explain why these apparently simple methods work so well with so many people. By the book’s end you will know how to apply them to your own situation and enjoy the benefits.

That’s why The One Minute Manager has continued to appear on business bestseller lists for more than two decades, and has become an international sensation.

Buy The One Minute Manager now 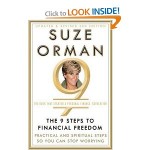 Practical and Spiritual Steps So You Can Stop Worrying

When Suze Orman was 13 she watched her father dive into the flames of his burning take-out chicken shack in order to rescue his cash register. In that moment Orman learned that money was more important than life itself. And so it became her quest to be rich. But years later, when Orman became a wealthy broker with a huge investment firm, she was profoundly unhappy. What went wrong? She had not yet achieved financial freedom. In her nine-step program, Orman covers the ingredients to financial success–confronting our beliefs and fears, learning the nuts and bolts (and insiders secrets!) of savvy management, and finding the spiritual trust that leads to abundance.

While Suze Orman tends to take a conservative and middle-class approach to money management, this book serves as a great first step to put the foundations in place from which to build.

I’ve been following this model in building my business and it has made a tremendous impact on my income, on my success with my clients and on how much fun I have working!

While these products are primarily focused on Coaching or Service and Consulting businesses, I’ve very successfully coached my clients in the Arts and Entertainment Industry to apply these concepts to their businesses.

I’ve also been teaching this business model in several classes recorded for the Artists Marketing & Business Academy.  And I’ve delivered the Multiple Streams of Art / Music Income workshop in Industry Conferences across the country.

Buy Multiple Streams of Income now (click through to the “Store” for the book.