In my fifteen years as a business coach for the professionally creative and creative entrepreneurs, I’ve seen a lot of incredibly smart, very talented people struggle to bring their dreams to fruition.

When I first started – I believed that this was largely due to a lack of knowledge in business fundamentals and business skills. Which is why I created the Artists Marketing & Business Academy – to help you close that knowledge gap.

And while I still believe that’s part of the problem, I’ve come to the conclusion that you could have all the knowledge and skill training and still struggle.

Because there’s a piece missing – and that’s ACTION!

Much to my surprise – it turns out action is a pretty complex word with many different meanings. But here are the ones I think are most useful for this conversation:

1a: thing done, a deed
b: the accomplishment of a thing usually over a period of time, in stages, or with the possibility of repetition
c: behavior, conduct
d: initiative, enterprise 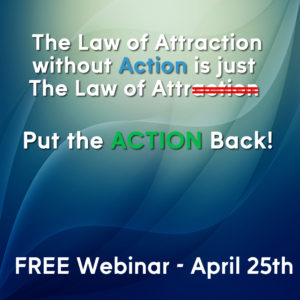 You may remember a movie that came out several years ago — The Secret — which showed this guy sitting on his couch dreaming about a car – and then magically that car appears. I’ve always found that to be a misleading and possibly destructive portrayal of the Law of Attraction. Which led me to begin tweeting this:

It seems so simple – then why do we struggle so much with getting into action, staying in action, and choosing which actions to focus on?

And why is it that some people seem to be completely stuck and stopped by these obstacles and others appear (at least from the outside) to be unstoppable?

You might think, “Well it’s just a difference in personality.”

Or, “It’s just easier for them than it is for me – they don’t have this problem with resistance or procrastination.”

Okay – you might notice that this is a pet peeve of mine – you’re not broken. They’re not better than you. And it’s not some character flaw that you have no choice in!

What stops us is a bit different in each person.

And it’s a useful exercise to examine what that dynamic is for you.

How do you know its time to stop? How do you know its the right time for some procrastination? (Wonder who’s tagged me on Facebook…) Understanding what your triggers are that begin this spiral into inertia or active resistance can help you disrupt that pattern. But understanding the pattern isn’t enough – you have to then have the tools to shift out of the pattern into something more productive.

What Allows or Even Motivates Action?

I believe that the primary difference between the folks that get stopped and the ones that seem to be unstoppable in their action is in their response to that stimulus. It’s not that they don’t get overwhelmed or experience fear. It’s not that they never question their choices or play the “Yeah, but…” game.

It’s that their response to that happening is to move forward into action.

So, when something seems to knock you off balance. When you feel stuck or stopped or resistant. When you are overwhelmed or stuck in perfectionism. Stand up and lean in.