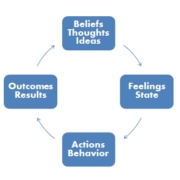 What’s stopping you?  Do you know?

Often when asked this question, the answer is either:

And often it’s even expressed as both – “Maybe it’s fear of success or failure.  I don’t know….”  Really, the truth is, it doesn’t matter which.  Because it’s not logical.  And you’re not going to be able to logic yourself past it.  Although understanding the underlying belief that’s driving your fear can be an important step in moving past it.

But Debra, how can you say it doesn’t matter?!?

In our society we’ve done ourselves a major disservice when it comes to Emotional Intelligence.  We’ve confused, disguised, conflated or combined thoughts with emotions.  The statement, “Fear of Success,” is emotion + thought/belief.  A better way to look at it is “I have beliefs about Success, and those beliefs cause me to feel fear!” 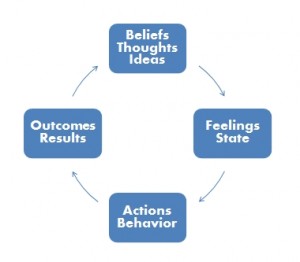 By saying Fear of Success, you are combining two different steps in the cycle!  But what you’re really experiencing clearly is the Feelings State.  And most likely the beliefs that are causing that feeling state are unconscious!  Which is why you might be unsure – is it success or failure or both that you fear?

As you can see from the cycle, what’s stopping you is the emotion, which is fueled by the beliefs.  Clearing or shifting those beliefs is the best, most long term solution to the problem of being stopped by fear.  But that’s a longer term project.  What if you just need to get into action now?

Here are a few suggestions:

In last month’s ArtistsMBA class, How to Move Past Your Fear of Success or Failure, I explained several specific and concrete methods for managing your fears around success and/or failure.  The most important first step is to acknowledge that this is what’s going on.  Because often, we miscategorize what’s going on.

You might name it procrastination or avoidance.  Perhaps you just feel pulled to take any action EXCEPT the one you know you need to take, even allowing other people’s needs to distract you from moving forward.

Haven’t you noticed that when you operate from fear, you end up manifesting the very thing you’re afraid of?

I’m not going to tell you that facing the fear, feeling the fear and moving through the fear will be easy and light.  In order to move through it, you must own it.

What I will tell you is that moving in the direction of the fear, rather than at the behest of the fear will create amazing results in your life and your career.  Fear can be a wonderful guide.  If you’re willing to let yourself feel it.

And let me leave you with this inspiring TED talk by Brene Brown:

In order to embrace your path to success in the Arts & Entertainment Industry – you must allow yourself to tell the story of who you are with your whole heart.

How can you use this to overcome your fear?  Please share with me what you discover!

@artistsedge
How to Move Past Your Fear of Success or Failure