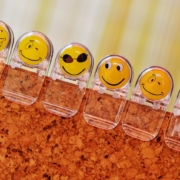 Just to refresh your memory, in the 1st Key, we looked at the big list, and in the 2nd Key, took everything off the plate that we could.  In the 3rd Key we talked about getting help and delegating.  But one of the biggest problems in maintaining focus during times of chaos and stress are the emotions that overwhelm us.  Emotions like anxiousness, worry, and fear can muddle your thinking, sap your energy and at their worst, stop you dead in your tracks.  So, what do you do?

Well the best thing to do is to practice your skills for managing your emotions when you are NOT under stress.  Of course, that doesn’t help you much now, does it.  Here are a few things that might:

Sometimes just saying – I feel anxious right now – can actually reduce how anxious you feel.  Notice I didn’t say I “am” anxious.  The difference may seem subtle but it’s profound.  The first is identifying a feeling.  The second is defining yourself by the feeling.  You are not your feelings, right?  You have feelings, they don’t have you…

See, it’s not about the emotions.  It’s about the underlying belief or issue that your emotions are calling your attention to.

The first part of this statement is simply naming the emotion.

The second part of that statement is about allowing yourself to become aware of the thought/belief that is stimulating that emotion.

Now, if you’ve taken my Transform Your Belief – the Key to Success class, you already know that I subscribe to the belief that no beliefs are right, real or true.  (I know it disturbs the time/space continuum).  So, identifying the belief isn’t about deciding if it’s right, real or true – because I already know it’s not.  And it’s not about proving that it’s not true or even really engaging with the belief in any way that leads to taking any of this too seriously.

I’m sitting down to do some work and all of these other things float into my head and I start feeling really anxious.

“I’m feeling anxious right now.  Huh, isn’t that interesting?  I wonder what I’m thinking/believing?  Oh, that’s interesting.  I’m believing that I’ll never get it all done and as a result I can’t succeed.”

What you may notice at this point is that you already feel a bit better.  Just naming the emotion and naming the belief connected to it can relieve some of the emotion that is overwhelming you and give you the ability to set it aside and focus.

Going one step further, if you can name the emotion and the belief with both respect while maintaining the knowledge that no belief is right, real or true, that can give you the perspective and clarity to release both the emotion and your attachment to the belief.  And with practice that can become second nature.

What are you noticing about your emotions and beliefs?

@artistsedge
Ask for Help – the 3rd Key to Maintaining Focus

Get the Learning – the 5th Key to Maintaining Focus in the Face of Ch...
Scroll to top