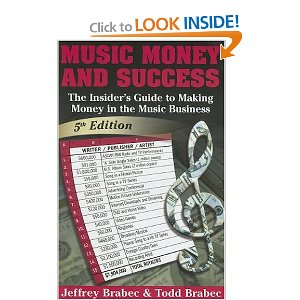 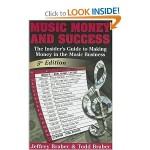 The Insider’s Guide to Making Money in the Music Industry

by Jeffrey Brabec and Todd Brabec

My friends, Jeff and Todd, have written a comprehensive and incredibly informative book about the world of music licensing.

The music and entertainment business means money for songwriters, composers, recording artists, musicians, music publishers and record companies. Whether it’s videogames, worldwide blockbuster movies, television programs which make instant stars, advertising commercials touting products via hit songs and records, cell phone ringtones or downloads and subscription services, Music Money And Success tells you how the business works and where the money comes from in every area of music. Whether you’re just starting out, looking to move up to the next level, been making a living in this business for years or are a major superstar, Music Money and Success is the blueprint for your financial success. This well reviewed book is now in its fifth edition and has been completely revised with updated information.

Endorsed by Billboard, Vibe, the American Bar Association, The Hollywood Reporter, Library Journal, Entertainment Law Reporter, and many others