Every year, I take some personal time to assess, adjust, write new goals for the New Year and make a plan for achieving those goals.  I’d like to share part of this process with you – and encourage you to use it for yourself to create a powerful, prosperous and joyful 2011.  I hope you will find this peek into my process helpful.

The first section of my process comes from Brendon Burchard, author of Life’s Golden Ticket.  This series of questions helps me to look at the year past as well as clarify what I want for the coming year. I’ll be answering them over the next several blog posts.  So let’s get started:

Remembering 2010 – Start Where You Are 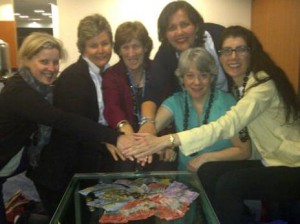 The biggest one that comes to mind was winning the Day 5 Game at Billionaire Bootcamp at the Gold Coast in November.

On the morning of “Games Day”, led by Clinton Swaine, I had an amazing breakthrough (ho!!) that enabled me to burst a limiting belief that has plagued me since childhood.  This belief had to do with working with/ leading teams, being accepted and how to handle being bullied.  And my breakthrough served to breakthrough about half the room – seems this is a common issue.  In the afternoon, we played 2 games that were simulations of big business. Now, I’m a small business coach.  I’ve never felt comfortable in the world of big business.  I’ve never worked in the corporate world, been at home leading teams, any of that stuff.  But I was elected CEO of my team in both games.  In the first game, I was wheeling and dealing, managing and allowing my team to do what they needed to do without micromanaging.  By trusting them, by trusting myself and by playing full out (we all did), my team won the game.  This was a huge deal for me.  And the moment on stage when Clinton asked me what worked – the biggest thing that worked was letting go and trusting myself and trusting them.  The picture is of my team from the first game. By the way – the multicolored stuff on the table – NOT Monopoly money!  The second game, I led a team of 19 people and I learned a tremendous amount about team management.

A few other memorable moments:

There was a morning in March, when I woke up and knew that I would be moving back to New Jersey.  It was surreal.  I had no reason to believe that I would have to move to NJ.  But I woke up just knowing it.  And, of course, that’s what happened.  When the time came, in August, to make the decision to move, it was easy and obvious.

Also in March I had my first conversation with Clare from CMC Productions.  There was a moment in the conversation when it was clear that she really wanted me to come out to do workshops in Australia.  This would pave the way for me to do Billionaire Bootcamp, complete my certification program with Chris Howard, as well as open up a whole new international market for my coaching and speaking business.

My father’s successful surgery and the subsequent significant improvement over the last few months.    Also, the tremendous support that I received around my move across country.  Tremendous support from my siblings as well as from clients, FB Friends, Twitter tweeps and even from complete strangers.  Many people contributed in small and large ways to make this move possible and I’m tremendously touched and grateful for each and every one.

How could I possible choose just one!?!  My siblings, in particular my sister Linda and brother Larry who went way above and beyond in the herculean task of moving me, my cats and my stuff across country!  My clients who were understanding of my very constricted availability this summer and fall.  Clare for making my trip to Australia possible.  Victoria and Martha for their wonderful friendship and support.

Again, so many.  I learned:

The most significant contribution I gave in 2010 was…

The training and support I give in every talk, workshop, private session, email and support call for my clients is the place where I make the most significant contribution, I believe.  I also have made a significant contribution to the quality of life for my Mom and Dad by moving across country to help in the day-to-day care of my Dad.   Coming out in August during the worst of my father’s illness was a major turning point for my Mom as well.

My ongoing technical development in Word Press, and social media such as Twitter and Facebook is probably the one I’ll be using most.  And that development is ongoing.  Also, the skills that I learned at Billionaire Bootcamp around thinking like a billionaire, the genius reading skill and the writing process will all be very important in the coming year.

@artistsedge
How to Build Your List with Elizabeth Edwards

Planning for the New Year – Part Two
Scroll to top